On Thursday, all classes in years 2, 3 and 4 were lucky enough to have a Gloucestershire Cricket Club coach come in to school to hold taster sessions throughout the day. All classes had the opportunity to develop their throwing, catching and hitting skills with a guest coach. Look at our action shots! Thank you Gloucestershire CC for the great day we had! 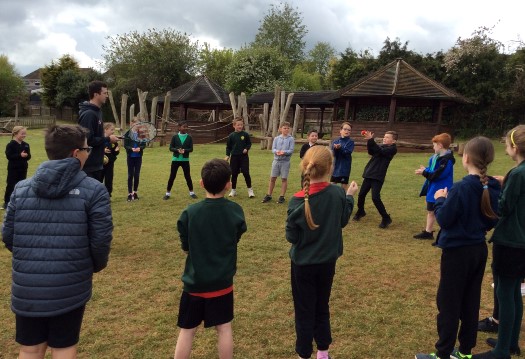 What a fantastic day was had by everyone! 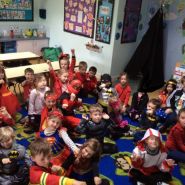 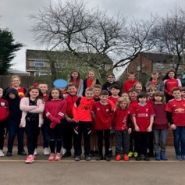 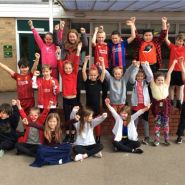 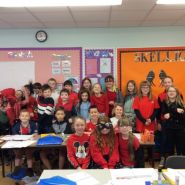 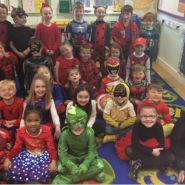 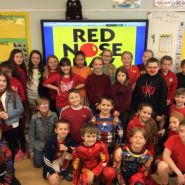 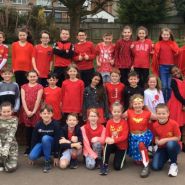 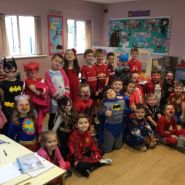 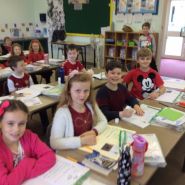 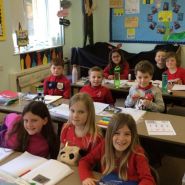 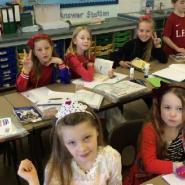 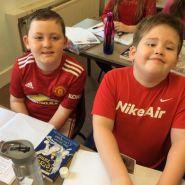 The children were busy thinking about wellness in school this week. Firstly by celebrating random acts of kind-ness on World Kindness Day. Reception children practised their new writing skills by creating kindness tokens and Year 6 wrote about how kindness can simply be when someone gives you a compliment or cheers for you in a game. Did you spot the Y6 kindness Pudseys in their window? 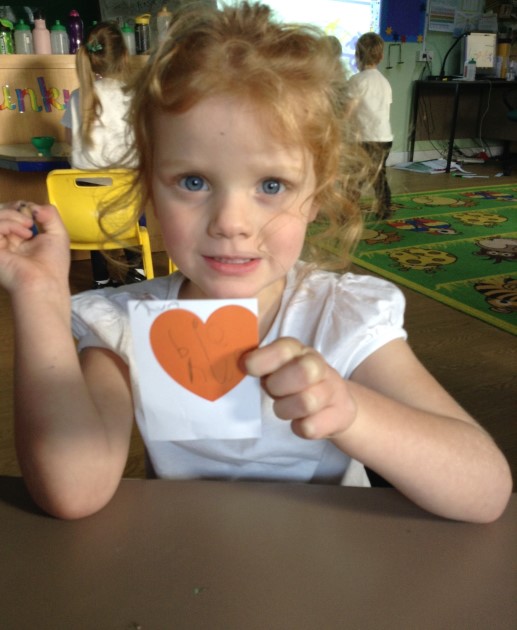 Children came in Pudsey related non-uniform and amongst working, lots of fun was had (of course!) and we took this opportunity to think about some of our values of Helping (service to others), Responsibility, Thankfulness, Hope, Generosity, Compassion, Friendship and more. Chil-dren at Longwell Green are becoming very able to understand and discuss the idea that we should indeed be thankful for small things as well as big things and that even though at times life is not always how we would want it, we each have the power to make changes that can have a huge impact as well as being thankful for the things we sometimes take for granted that others don’t always have. Thank you all at home for supporting this too! 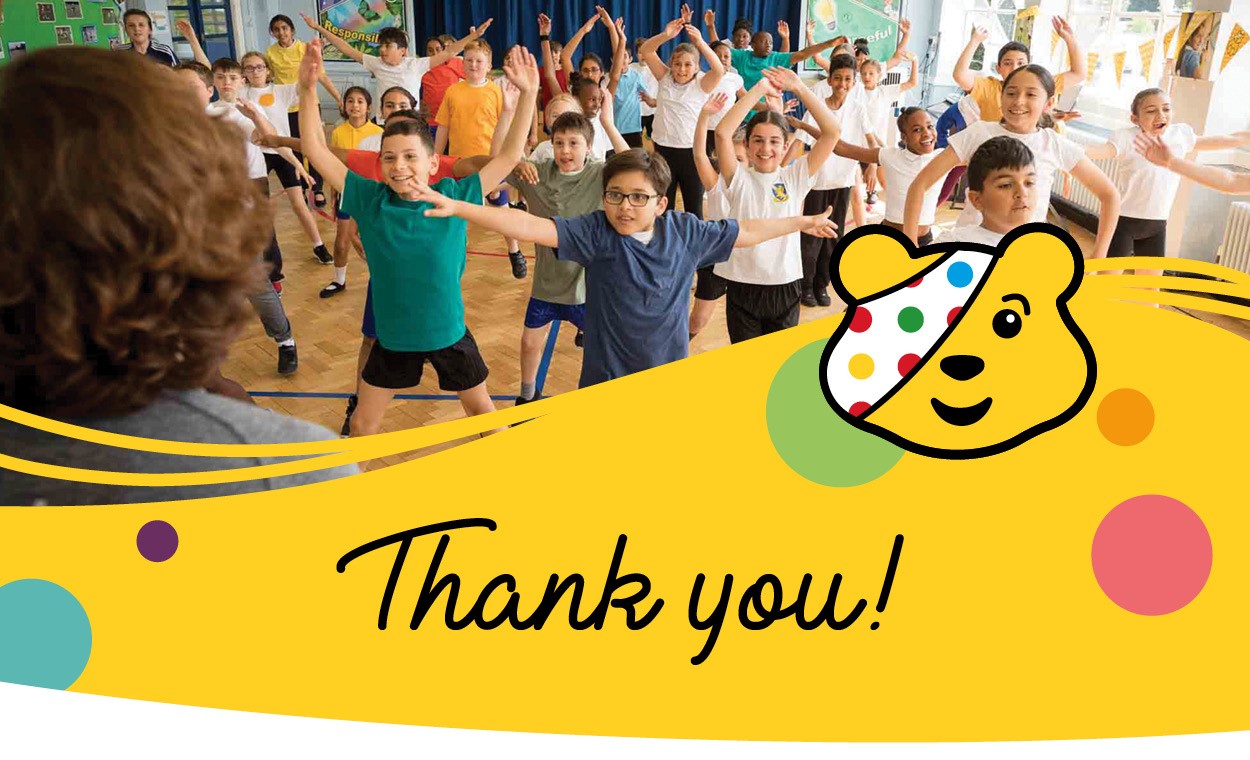 World Book Day
Another fantastic World Book day has passed. Thank you families and children for making such a fab effort with the costumes. It is really nice to see the children dressed up as characters from books and having conversations about where they live, what they’re like as well as what exciting little accessories make them unique. The dressing up is fun and brings stories to life but the important thing we are always trying to promote is a LOVE of reading!
It’s important for us all to remember that ‘Reading For Pleasure is the single most important indicator of a child’s future success’ OECD 2002 and if we can get children reading for pleasure they will be exposed to magical, wonder-ful lands full of the possible and impossible, their lives will be filled with colour, they will learn and understand new vocabulary as well as understand the world around them including other people’s lives and develop empathy towards others.
Mrs Dawson 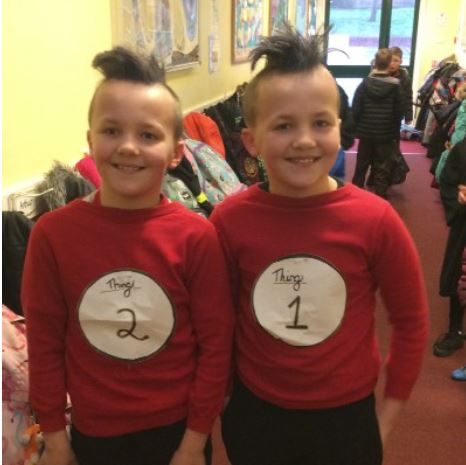 Hannah Shaw Visit!
Longwell Green was fortunate enough to receive a visit from Hannah Shaw; a published Author and Illustrator. She shared with us some of her top tips for creating books and characters. We were very lucky to hear some pages from her new book ‘Unipiggle’! She showed us step by step how to draw her main character with lots of different emotions. We also got a sneaky peak at the new advert for Unipiggle which was great! Lot’s of children bought their own copies of Unipiggle and got them signed by Hannah. Some children had drawn some of Hannah Shaw’s book covers and shared their pictures with Hannah! 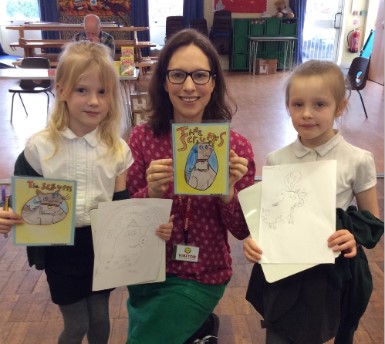 We’ve been shortlisted for an Eco Award!
We were very honoured this week to have a visit from one of the judges from the upcoming Bath and West Show as we have been shortlisted (along with one other school) to potentially represent our county (not just the LA, but the entire county) at the Bath and West show as a school who have been providing our pupils with a great education in all things Eco. Each of the 6 featured counties in Bath and West Show area will have a school presenting at the upcoming show, with a winner being announced at the show; so even to have been selected to get to this stage is something impressive indeed. This demonstrates how much we do in school to raise awareness of ecological issues and solutions, through so many different avenues. It’s nearly impossible to mentioned them all, but for example from having an Eco Council (as well as a School Pupil Council and a Wellbeing Pupil Council) from recycling to awareness of energy, composting to planting 50 new trees within the last 12 months, from learning about trees, plants and fruits in a hands on way to growing crops to harvest and eat, from managing eco-systems to help the tiniest insects through to birds and hedgehogs, to teaching pupils that they can positively impact the environment around them and so much more. We were honoured to even get this far and we await the outcome in 2020.

A big thank you to all of the pupils who work hard every day to make our school and local environment a bit better and also to staff that directly support this; Mrs Bryant, Mrs Hatcliffe and Mrs Taylor, as well as all of the staff who continually support this really valuable real life learning. 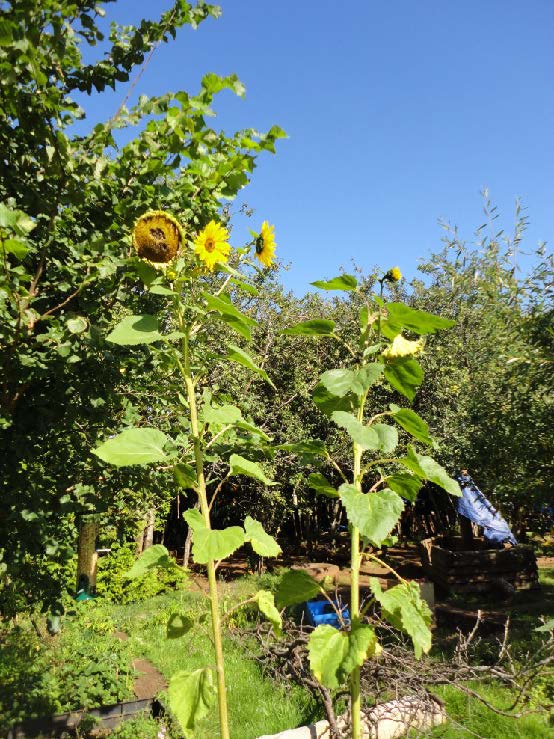 We are on Radio Bristol – again!
Year 2 were very lucky to have a visitor from Radio Bristol this week! They wanted to know all about our Nativity and what it takes to be a part of it. Some of our excellent actresses and actors spoke to them including: Tillie C (The Dove), Zayn (Angel Gabrielle), Kirianna (Little Angel) and Theo (Shepherd). The children were very excited and even sang a song for them! They will be playing our interview on the radio on Saturday 7th December between 11:20 and 11:40 if you’d like to listen in! It will also be available on BBC sound after being aired. 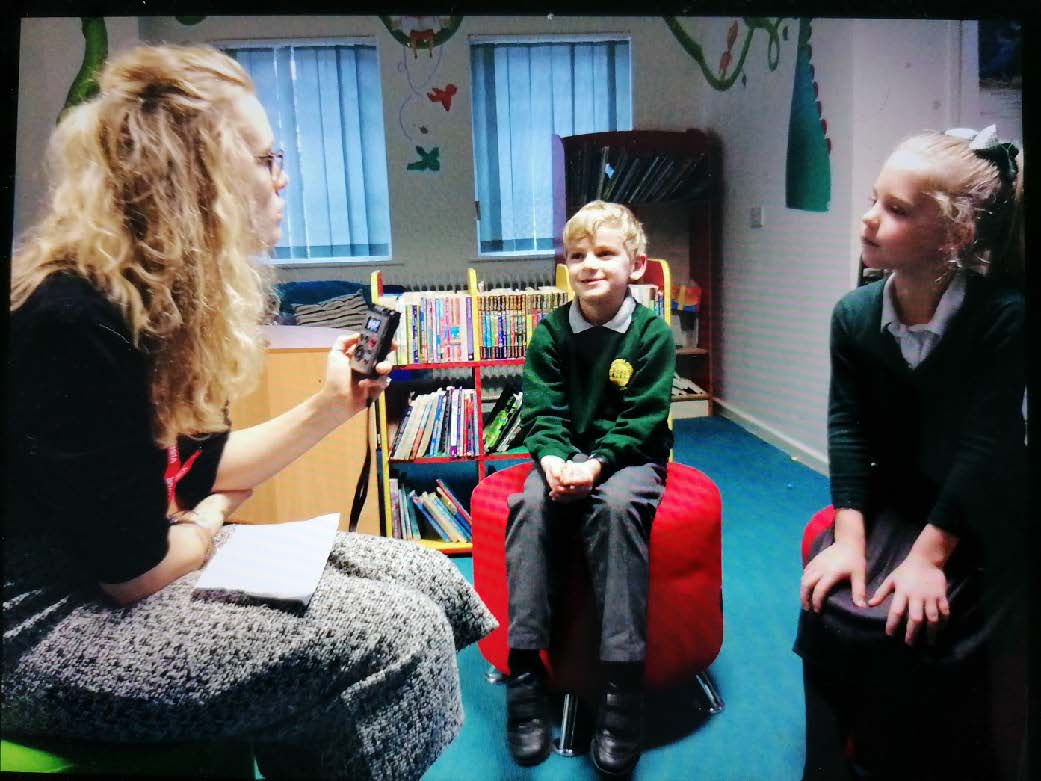 Author Visit
On Tuesday 26th November, author Nick Cook came into the school to do a workshop with sever-al other schools, including our own, about tornadoes and writing. He demonstrated a miniscule tornado and a student from Two-Mile Hill primary got to touch it and when she took her hand out, it was moist.

After he explained tornadoes in more depth, we started to write our own stories about tornadoes based on Nick’s books also about tornadoes. The story had to be in first or third person and they had to be about an immediate reaction to a tornado hitting the scene. We wrote for about 10 minutes and the stories were all fantastic. Finally it was lunch and were able to purchase one of Nick’s Cloud Riders books.

Once we finished our lunch, we used a green screen to create a news segment about a tornado hitting Bristol! We were all cast for different roles like Camera Operator, Storm Chasers (who assess strengths of storms and tornadoes), News Presenter, Weather Forecast person and Sound Manager. It was so much fun as we got to meet new people along the way and we got to watch our reports (which were amazing). The day helped all the students release their passions for writing in fun ways we all enjoyed. We would also like to thank Nick Cook for telling us about his journey to becoming a great author for all ages to read and using his equipment and spare time to plan out super activities for everyone to enjoy. We would also like to thank all the adults who helped out especially Mrs Dawson who organized the amazing day.
Year 6 boys

Last Friday, all the shoeboxes for ‘Operation Christmas Child’ were collected and taken to the central col-lection warehouse. It is there that they’ll be packaged and flown out to children across the world, who won’t be receiving gifts other than these shoeboxes. Longwell Green Primary school contributed 63 shoeboxes towards the charity (can you spot yours in the photo?) Thank you so much to everyone who has helped and supported this amazing charity. Sharing compassion and love through these simple little parcels will be bring so much joy to lots of children this Christmas. Mrs English
www.samaritans-purse.org.uk

STEM awards 2019
We want to congratulate Aidan and Jessie who won a prestigious South Gloucestershire STEM (Science, Technology, Engineering and Mathematics) award, the first time this has been given to primary aged pupils in the county. They were awarded this for excellence shown in school in all of these areas. We spent a lovely Friday evening sat under the wings of concord in Aerospace Bristol in what was a very impressive even-ing – really well done Aidan and Jessie and well deserved.

Harvest Service
It was amazing to see so many family members at our Harvest Service last week; thank you to everyone who came along and for all the donations which were gratefully received by the East Bristol Foodbank. The children, as always, were brilliant – well done to all of them!

European Languages Day
Last Thursday, the whole school took part in a European Languages Day event. It was a fantas-tic, fun day for all the children who thoroughly enjoyed having a taster of the various languages and finding out about France, Russia, Italy, Spain, Austria, Germany and Poland. It was a very colourful day with the children dressing up in different colours to represent the country they were learning about.

The children took part in lots of different activities relating to their different chosen coun-tries. Year 6 became engineers for the day and built the Eiffel Tower out of straws as well as having a serious debate and subsequent vote on whether to remain or exit the European Union. After doing some map work and locating Russia and looking at the capital and major cities, Year 5 made Russian dolls out of card and learnt greetings in Russian. Year 4 began their experience by tasting and evaluating food from Italy. Italian Christmas cake (Pandoro) turned out to be a firm favourite. They then located the main cities of Italy and learnt about its famous landmarks, bor-dering countries, mountains and rivers. They learnt numbers 1-20 applying their knowledge to basic maths and completed the day by making flags after learning about the significance of the colours of the Italian flag. Year 3, had a Spanish speaking parent volunteer, Miss Stevens, to teach the children lots of useful phrases and they learnt about the cultural differences between Spain and England. To round off the day, they took to the dance floor to learn and perform the Flamenco and Chotis dance. Year 2, after learning all about the country of Austria and basic language phrases and tasting and evaluating food, had music lessons in yodelling and gave a lovely performance in our assembly on Friday. Year 1 located Germany on the globe, made comparisons between Germany and England, counted to ten and learnt greetings. Reception had another par-ent helper, Mrs Mallard, in to talk about Poland and teach the children to count in Polish as well as learning how to sing ‘head, shoulders, knees and toes’. They made the polish flag using lots of different mediums and painted the national flower of Poland – poppies – using bottle-top printing. 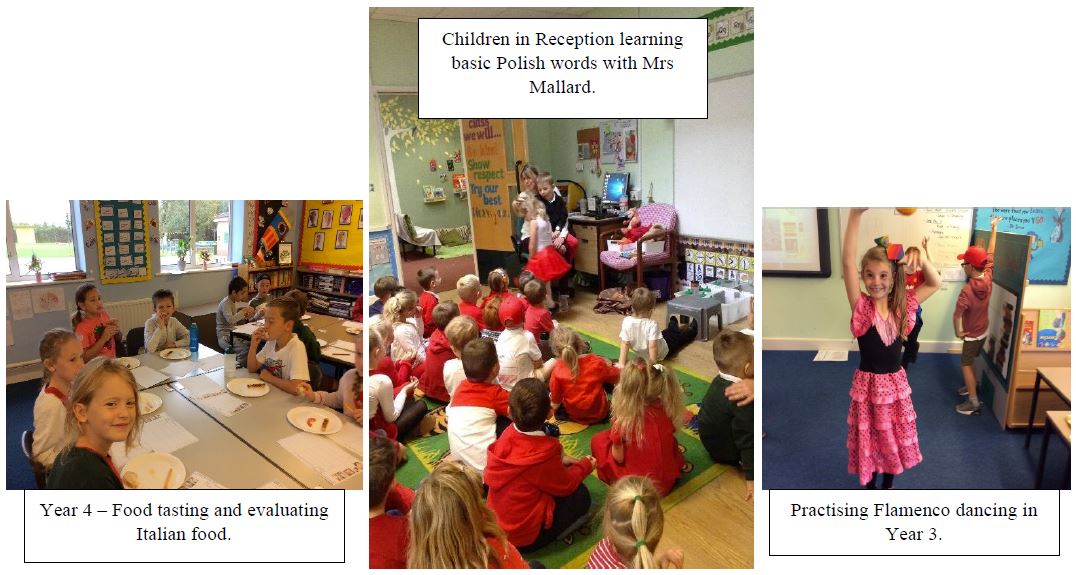