After an exciting World Book Day, Year 6 became fully immersed as explorers and mountaineers last Friday. Firstly we learnt and researched about the five different kinds of mountains. With this knowledge, we junk modelled in groups to create one of these mountain forms. Can you tell which one is a ‘fold mountain’ for example or a ‘plateau mountain’? Each group was then able to display their mountains for the rest of the class to see. In the afternoon, we developed our six digit grid reference map skills along with how to use a compass accurately. Groups had to go orienteering all around the school grounds and find 16 clues. This was not as easy as it first seemed, but all groups showed resilience and ‘spirit of adventurers ’. 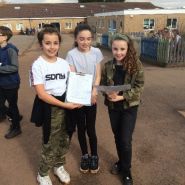 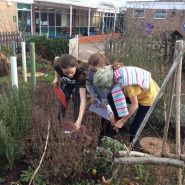 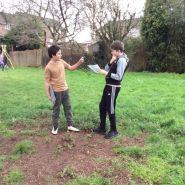 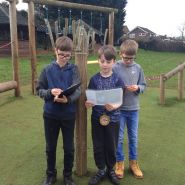 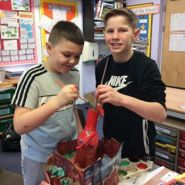 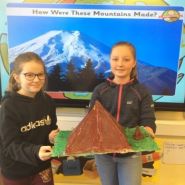 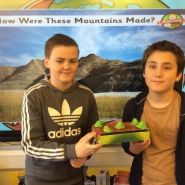 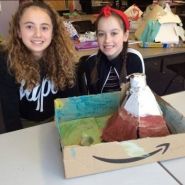 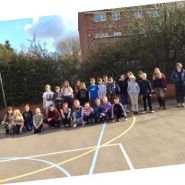 Year 6 had great fun completing a Road Safety workshop run by South Gloucester Council. In groups, the children participated in many different games, each of which developed their knowledge of road safety and the Green Cross Code. At the end of the session, the children shared their new knowledge and explained how it would help keep them safe as they grow in independence.

The children in Year 6 explored electricity in our ‘Feel the Power’ Wow day last Friday. We spent the morning constructing electrical circuits and investigating how different numbers of components affected the brightness of a bulb. Many said, ‘ I really enjoyed building my own circuit!’ We also used the laptops to construct and test circuits on the computer. The children loved using these computer programmes! In the afternoon, the children designed and created different emergency gadgets which would help people or save lives in the mountains. Many ingenious ideas were created including buggies, winches and emergency beacons. Each device had an electrical circuit as part of the design.

We also looked at different examples of POP ART and created electrical themed examples of their own. Overall, the children had a fantastic day! Fynn (excuse the pun) said, ‘The day made me feel powerful!’ 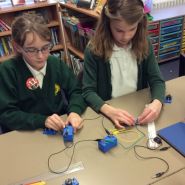 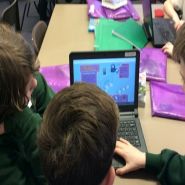 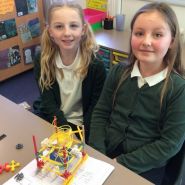 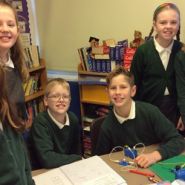 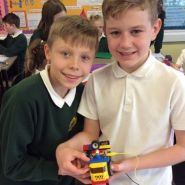 We have been learning about Ancient Greece as our topic this term. On Thursday, all the children in Year 6 were challenged with finding out about another ancient civilisation – ancient Egypt!

For our Personal Challenge we found out about many different elements of Ancient Egypt from pyramids, to the River Nile, to music and food to Egyptian scientists. Each child shared a presenta-tion to the rest of their class. In the afternoon, lots of other classes came to see what we had been learning about. Thank you to all the parents who were able to join us at the end of the afternoon! 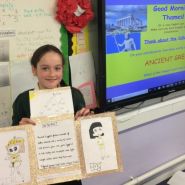 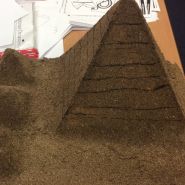 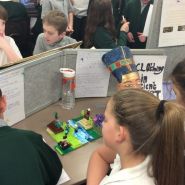 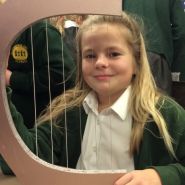 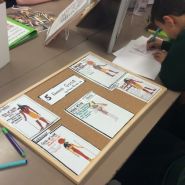 In the morning, a man came in to talk to us about Ancient Greece. He told us a story about the Ancient Greek people and their gods. Our two teachers, Miss Cranmer and Mrs Mason, had to hold up a flag with all of the countries that were involved in the action. He also split us into two teams – Athens (Thames class) and Sparta (Mississippi).
“I really enjoyed pushing Miss Cranmer (leader of Athens) off a bench!” Alfie
After the man had finished telling the story, he got us to do a little test. He put up four boards that were double sided with the information that we needed to fill in the test that he gave us.

After we finished, the man divided us into groups and gave us a pile of multi-coloured triangles. We had a diagram to show us what we had to eventually achieve; it was a pic-ture of a square with all of the triangles in different places. It was quite difficult as sometimes we had to flip the triangles over to see if they would fit. Olivia, Ebonny, Archie and Poppy’s group finished the task first. Then, the visitor told us about a clever man who was a genius back in ancient Greek times. The man of a genius, was called Archimedes; he has created the puzzle and solved it! He also invented the Archimedes screw. The Archimedes screw can lift water up hill. Archimedes also invented lots of other things like the puzzle that we made earlier on that day.

After break time, we played a game which was called Paletta. It was a two player game; there was two different coloured pebbles, one black and the other white, and the players took it in turns to be each colour. The aim of the game was to wipe the others player’s warriors off the board!

Then we had lunch and went back to the hall and the visitor showed us his Ancient Greek armour. He chose JJ, George and Finley to come up and try it on; there was a helmet with horse hair streaming down the back of it like a Mohican, body ar-mour that covered his chest, and armour that covered his shins. All of the armour was made out of polished bronze. After this, we all got the opportunity to try holding a sword and trying on the armour.

The last part of the afternoon consisted of us learning Ancient Greek war cries and war marches.

We also played a mini Olympic Games where we had to throw multi-coloured hoops over a bull’s horns and throw javelins at our visitor who was holding an Ancient Greek Olympic shield!
“I loved the Ancient Olympic Games and I re-enacted events at home with my sister.” Eva S
Finally, we were told the story of Jason and the Golden Fleece and some of our class mates helped to act it out. Overall, we had a fantastic day!
“I loved re-enacting the story at the end with all the characters.” Jaiden
Written by Olivia, Honey & Ria. 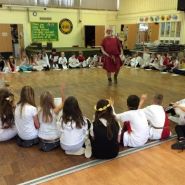 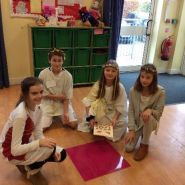 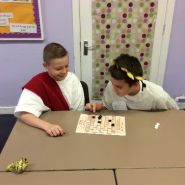 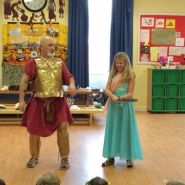 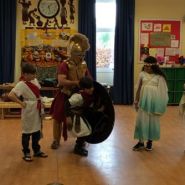